Curtea de Argeș – the town where the monastery with the same name is located, where the kings of Romania are buried. Its beauty and splendour and the legend of its construction, has become a pilgrimage place for tourists from all over the world, especially the local believers who come here to pray in a place of supreme importance to them.

The monastery of Curtea de Argeș was built between 1512 and 1517 by Neagoe Basarab – the ruler of Romania, in a Byzantine style, with elements of Persian, Armenian and Georgian art, a combination that unites in perfect harmony to create its unique appearance. Thanks to this unique architecture is the most important architectural and architectural site of prayer. The face of the church is impressive, with magnificent oil paintings of angels and kings of Romania, created by the finest French painters of the time, many gold icons, gold plaques inscribed by the hand of Queen Elisabetta and twelve magnificent marble columns representing the twelve apostles. Here the remains of angels and saints are buried, and Basarab’s gravestone, Radu Negru, Basarab’s son-in-law, and the royal couples: Carole I and Elizabeta, King Ferdinand and Maria, King Mihai and Ana.

The Legend Of The Builder Manole

Neagoe Basarab wanted to build the most beautiful monastery in his country, so he hired the ten best builders, led by Manole, the best builder of all, and ordered them to build the monastery that had not yet been built. Manole and the builders began their work with great vigor, but the walls raise by day crumbled at night. In the fury, he threatened Manole that if they could not build the monastery, he would execute them. The anxious Manole fell asleep briefly and dreamed that an angel had come to him and told him that the walls of the monastery would last only if they were built on the body of one of the builders’ women. Told his dream to the rest of the builders and agreed that the first woman to come would be their victim. Every builder prayed that his wife would not come to the place, but unfortunately Manole’s wife first arrived, thus built into one wall of the beautiful monastery. Basarab saw their work and was very pleased. Manole and the builders began to boast of their ability to build more magnificent monasteries, so Basarab was frightened because he wanted such a beauty to be in his possession only and ordered them to climb the roof of the monastery and topple the ladder so that they could not descend. Manole and the rest of the builders built their own wings from the remains of the construction planks and tried to fly to Israel, but unfortunately they all crashed and died. A water fountain later named after Manole burst into the place where Manole fell. On the southern side of the church, where Manole’s wife was sacrificed, a symbol can be seen on the wall with a red inscription indicating the location where the builder’s wife Ana is to be found. 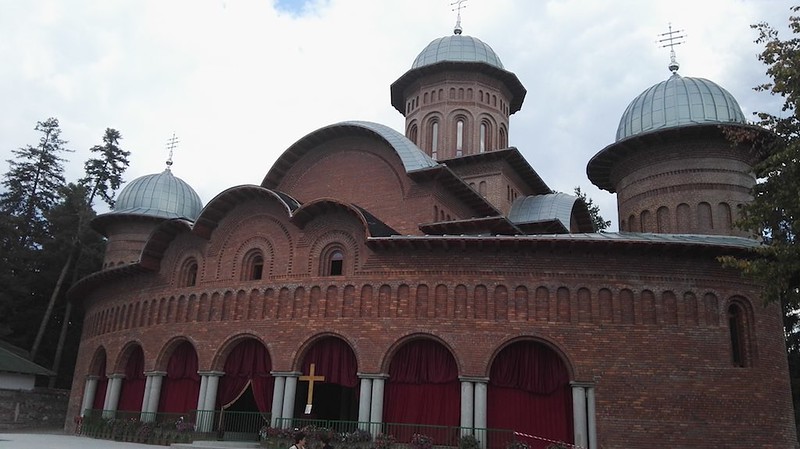 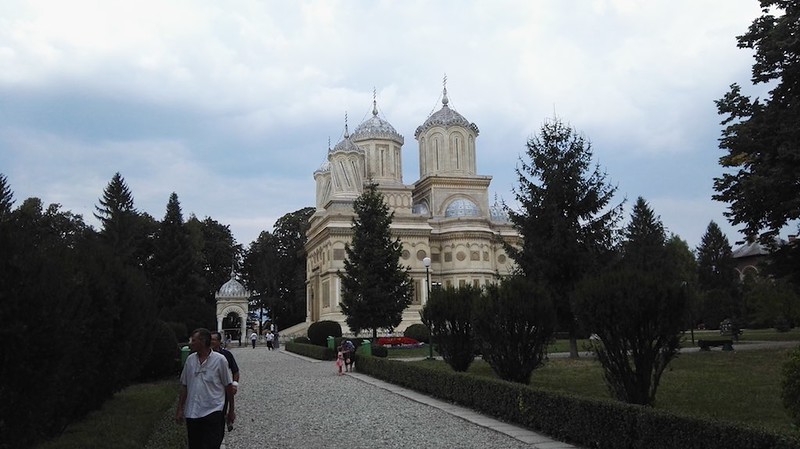 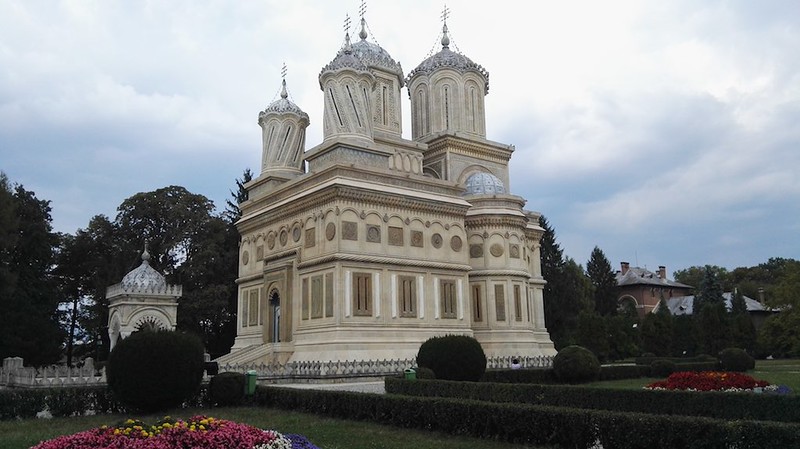 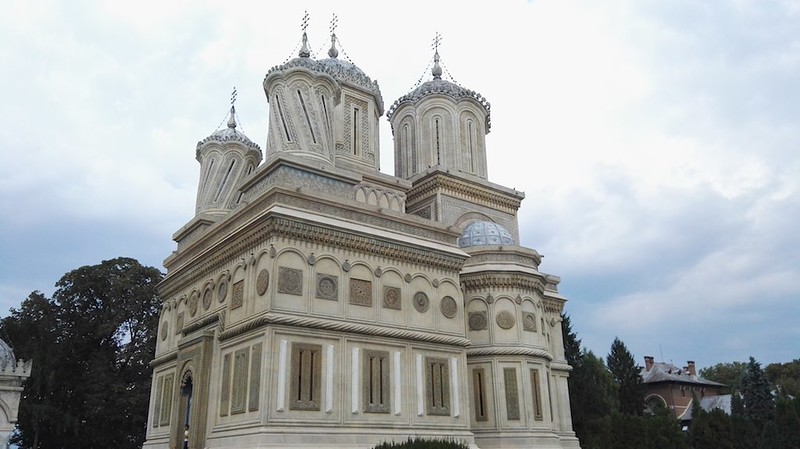 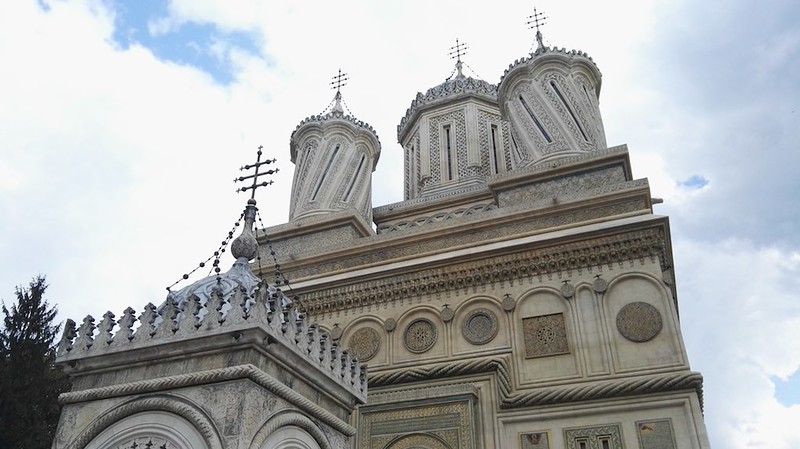 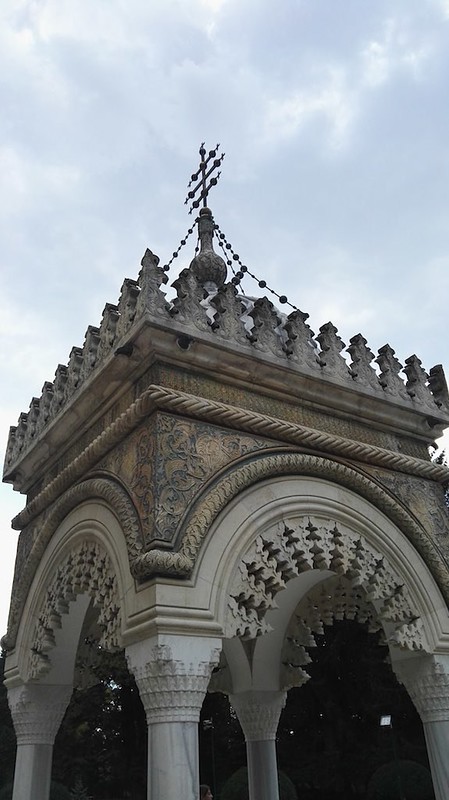 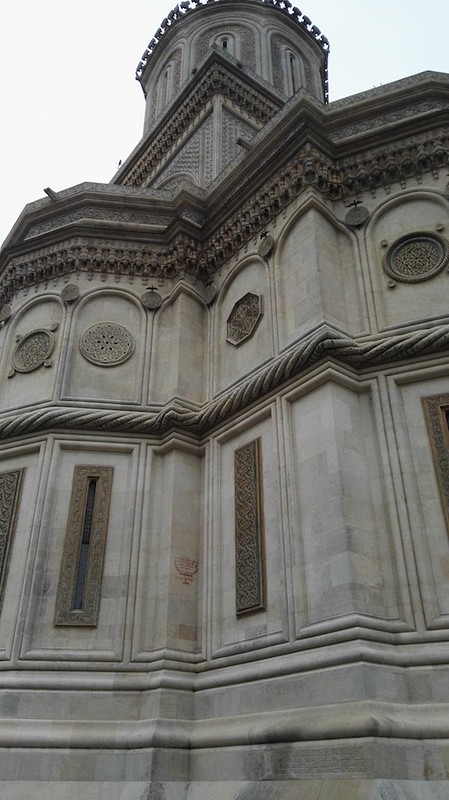