The Râșnov Citadel was built between 1212-1225, as part of the protection system for the villages of Transylvania from the invasion of foreigners. A decisive aspect for building the citadel on the actual location was the route of the invading armies which were coming from the Bran pass and were passing through Râșnov, on their way to Burzenland (Țara Bârsei). The only chance of survival for the inhabitants of the area, inclusively from nearby Cristian and Ghimbav, was the refuge inside the citadel. Compelled to stay there for decades, the people of Râșnov and the nearby villages turned the fortification into a dwelling. The fortress can be seen from wherever you travel to Rasnov and many tourists stop at the roadside to be photographed with the fortress from afar. It is one of the fortresses that were perfectly preserved, underwent renovations in 2010 and opened to the general public for independent visits in the beautiful place. The preserved fortress houses are now souvenir shops, ranges for throwing swords and knives like the knights did in the past, a shop for lucky stones, knights’ clothing, etc. At the top of the fortress you can take pictures of all the beauty of the region.

The absence of an internal water source led to the limitation of long term resistance during sieges. Because of this lack, in 1623 it was decided to start the digging of a well in the rocky soil. 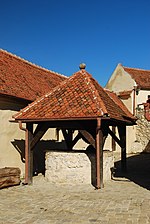 The legend says that during a siege, the inhabitants of the citadel made two Turkish prisoners dig a well in the middle of the citadel in order to regain their freedom. The captives dug for 17 years, during which time they wrote verses from Quran on the well walls which can be seen even today. The fate of the prisoners isn’t known, with some saying that they were released, and others that they were killed.
The well was used until 1850 when a broken wheel in the well windlass caused its abandonment.
The elders from Râșnov believe that deep in the well lies a treasure at least 300 years old.
Show More
error: Content is protected !!